European History is my jam!  All of it.  Kings, wars, and all the arranged marriages that intertwined 2 countries .  I just find European History to be so interesting.  Last year I read a lot of French History and about the Habsburgs.  This year I have been digging really deep into Italian Renaissance history.

I have read several books on the Renaissance, the Medici family, Italian history, Machiavelli and various artists. My recent favorite was a book called The Tigress of Forli which recounts the life and times of Catarina Sforza.  This book was a great read (if you like this kind of thing like I do).  All this new found knowledge is whispering to me to plan another trip.

I like reading several different versions of the same historical account and comparing the varying perspectives.  I also found it fun to watch The Medici Series and The Borgias, but found myself picking apart the historical errors in both of these dramatizations.

Before heading off on my next adventure, my goal is to read and research as much as possible so that I am fully informed about what I want to see and be able to  understand the significance of the places I visit.

I am currently reading The Prince by Machiavelli.  The next book on my Renaissance reading list is about it’s powerful and influential women including Lucrezia Turnabuoni, Clarice Orsini, Beatrice d’Este, Isabella d’Este, Caterina Sforza, Giulia Farnese, Isabella d’Aragona, and Lucrezia Borgia.  If you have any books on this subject that you have read and think I should check out, be sure to leave a note in the Comments.

Laying out an Itinerary for my Renaissance Adventure

I would like to use Milan as my start and end point for my next trip to Italy.  I have have stopped in Milan twice for about 3 – 4 hourse each time.   Our first trip we took a tour of Sforza Castle, La Scala Opera House, The Galleria and could view the exterior of the Duomo of Milan.  Our second trip we again saw the exterior of the Duomo, went to the rooftop of the Galleria and enjoyed a spritz.  I know you can’t see everything on a Tour, but 3-4 hours is a just a tease in Milan!

I have never been there long enough to see the Last Supper located in  Santa Maria delle Grazie or to go through the Duomo di Milano.  The Duomo is the largest church in Italy and took 6 centuries to complete.  With so many different influences and artists involved along the way, it has to be amazing to behold.

For this trip I would be flying into Milan and spending two days there exploring the Duomo and seeing the Last Supper as well as revisiting the Sforza castle.  I want to see it with my new found perspective from having done so much research on the Sforza family since our first time there.  I also think Mark and I need to try some Risotto Milanese! 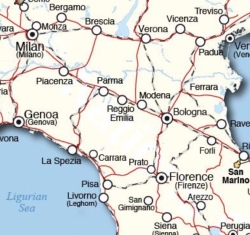 I have basically drawn a rectangle starting from Milan traveling south east to Forli before heading west to Florence and then Lucca. There would be no stop in Pisa (I will have to write a post soon about why I will never go back to Pisa).  From there going north through the coastal hill towns from La Spezia to Genoa before returning to Milan.

From Milan, I want to travel southeast through  Emilia Romagna, which is all new territory for me.  The area is a food mecca as well as where most of the historical events took place in The Tiger of Forli for Catarina Sforza.

First stop on the Route, Parma.  Although Parma is known culinarily for Parmigiano-Reggiano cheese and Prosciutto di Parma, it also has many of it’s own significant sites.  Parma has a Duomo, a Baptistery, the Church of St. John the Evangelist, as well as beautiful Piazzas and Museums.  I think this will have to be an overnight stop with dinner of course!

Leaving from Parma I would continue on to Modena.  Not only is this city beautiful, it is famous for balsamic vinegar that is made there and Italian sports cars like ferrari, Lamborghini, Pagani and Maserati.  After taking in the sites and tastes of Modena, I would like to travel to Bologna for the night.

Bologna is the capital of the Emilia Romagna region and there is plenty to see there.  In the Piazza Maggiore area, you will find the Pallazo d’Accursio, the Palazzo del Podesta, the Basilica di San Petronio and the Palazzo Comunale as well as the Fountain of Neptune and the National Gallery. Nearby you can see Bologna’s own Leaning Towers in the Piazza di Porta Ravegnana, The Bascilica of St. Stephen and the sculpture filled Oratory of Batutti.

The next day will consist of stops in both Imola and Forli to see castles and fortresses once controlled by Catarina Sforza.  Tops on the list is Rocca di Ravaldino where she held off Cesare Borgia and his massive army for many days before they were finally able to trick their way in and capture her.  Also a visit to the San Mercuriale Abbey is a must before traveling on toward Florence.

Although I have spent a few days in Florence before, you could spend weeks there and not see everything, especially if you are an Art and History nerd like me.  I have been to the Accadamia Gallery to see the David, and done a walking tour quickly viewing the famous landmarks like the Duomo, Baptistery and Gates of Paradise.  We did find time to spend a few hours in the Uffizi taking in many beautiful Renaissance artworks.  Some of my favorites were the Birth of Venus and the Primavera by Botticelli.

I would like to spend two days in Florence on this trip.  During that time, I would like to visit the Duomo, further explore the Piazza della Signoria (a lot of history took place in that square), revisit the Uffizi and Eat!  I can never get enough of the food in Italy.  If time permits, I would also like to go back to Castello di Trebbio.  The Castello is located in the hills of Tuscany and not only holds much rich history, but is a working vineyard and winery that also produces it’s own olive oil and saffron.

After leaving Florence, I would head west toward the Ligurian Sea and stop in Lucca.    Lucca is a walled city that was one of the Italy’s largest City States.  It has been held by many different sects throughout it’s history.  It was significantly affected by the French during the invasion of Italy at the end of the 1400’s and again when it was conquered by Napoleon in 1805. At that time he gave his sister the title of  Duchess of Lucca and Princess of Piombino.

More fun facts about Lucca: there is a Fortress, many cathedrals and a basilica.  It is the birthplace of Puccini and one of the places Dante lived during his exile.

From Lucca I would begin the scenic journey up the western coast of Italy stopping along the way in some of it’s beautiful hill towns like La Spezia, Cinque Terre and Portofino.

Cinque Terre, which means five lands, is a Unesco World Heritage Site while Portofino is where the rich and famous play.  It might be fun to take a look around in beautiful Portofino, but I think we are more likely to stay where it is a little more budget friendly!

Although there would be a few more historical points to check out in Genoa, the remainder of the trip would be made up of random stops and simply enjoying the beautiful country.  From Genoa I would head north and east toward Milan where my journey would come to an end.

I think this trip would be a great combination of Historical exploration and a chance to really enjoy the country. I think the drive along the coast from Lucca to Genoa would be spectacular.  Of course, the food and wine in this region could only add to this experience.  Without being part of a Tour Group, there would be no rushing through things and more freedom to make random stops and be spontaneous.  Good News!  Mark says he is “in” if he gets to drive a car with a stick shift.  Consider that done!

Sigh…..Now I just have to find a way to fit this trip in since I already have plans for a big trip to Portugal next fall.

One thought on “Planning Another Trip to Italy”