Last year we took an exciting 14 day trip across Europe with a Tour Group. One place we explored was Lucerne, Switzerland.

Lucerne was one of the places that I wasn’t sure what to expect. My mental picture of Switzerland was snow, alpine houses and sheep on the hills (Like the movie Heidi). 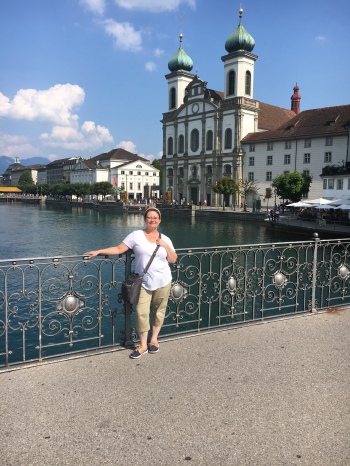 Although there were plenty of mountain peeks, Lucerne was nothing like I expected. It is a beautiful old world city filled with history, charm and tradition.  When we arrived, we wasted no time dropping our bags and heading out to see as much as we could before dinner.

The Memorial was created around 1820 as a tribute to the nearly 800 Swiss Guard who died protecting King Louis XVI and his family during the French Revolution. The monument conveys much symbolism and is a very moving piece to see up close. 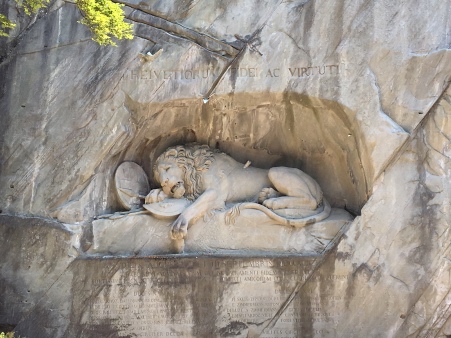 We crossed the famed Chapel Bridge. Built in 1333, it is the oldest covered bridge in Europe. It was severely damaged by fire in 1993 but has been mostly restored.

One of my favorite parts of the Chapel Bridge are the panels in the rafters. Each triangle is a painting telling the story of the towns history. Some date back to the 17th century and some are missing or blank due to being damaged in the fire.  I also found it unique that the bridge crosses the River Reuss diagonally. It adds to the charm. 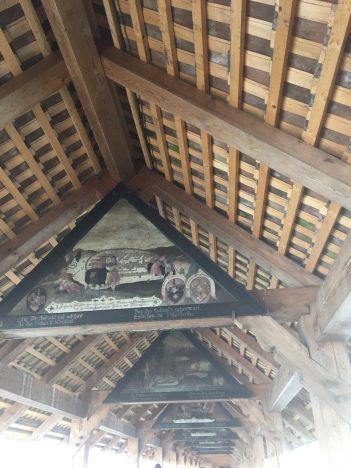 I am not a big shopper when we travel, but Mark was interested in a Swiss Army knife.  So we purchased two Swiss Army knives (one was a gift) and have them engraved. Who knew there were so many varieties to choose from.

Later we crossed the Chapel Bridge again on our walk to dinner. It was a totally different feeling with the sun setting and the lights coming on.  It was even prettier as it got fully dark. 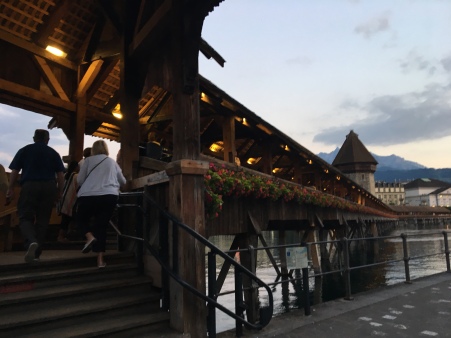 The Stadkeller was where we went for Dinner and a Swiss Folklore show.  The buildings in Lucerne are so ornate. The Stadkeller had traditional colors and artwork while the building across the street from it had really bold colors and darker themed images.  I would have like to have seen inside that building. 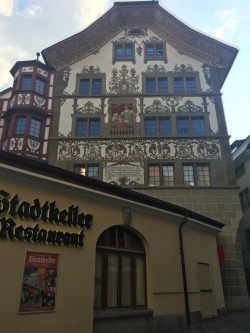 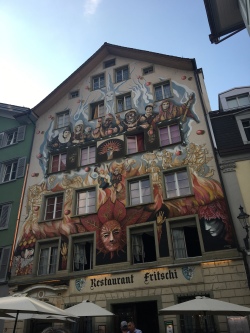 Appropriately, we started with a Swiss Cheese Fondue as an appetizer and finished with Chocolate Fondue for dessert. I also had a small (giggle) stein of local beer! 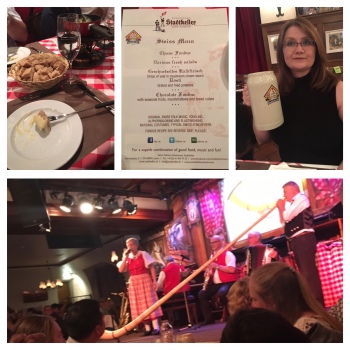 The show was fun and entertaining with a Lawrence Welk style delivery. Then they started pulling people up for contests in yodeling and playing the alpine horns. Great food and fun entertainment.

Day 2 we boarded a boat with our group for a cruise across Lake Lucerne. The sun was shining and the scenery was gorgeous.

We sailed by this statue of Jesus with outstretched arms along the edge of the lake.  What was interesting to me was that the people below were sunbathing in their swimsuits so close to this religious monument.

Although I think this honor is normally reserved for kids, the Captain let Mark have a few moments driving the boat.  Mark IS a big kid at heart.  When we reached the other side of the lake, we boarded a bus and headed to Stans. 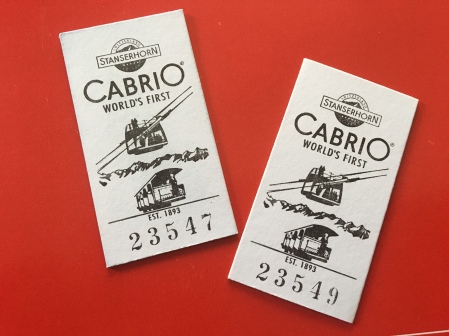 In order to climb up Mount Stanserhorn you start from a Funicular Train then switch to a Cabrio Cable Car. It was a beautiful ride up (unless you are my husband Mark who hates heights). The view when we got to the top was amazing.

While I was on the Observation Deck taking in the view, Mark scoped out the place for lunch. I think a beer and a Charcuterie Board made with local cheese and sausages prepared him for the ride back down. 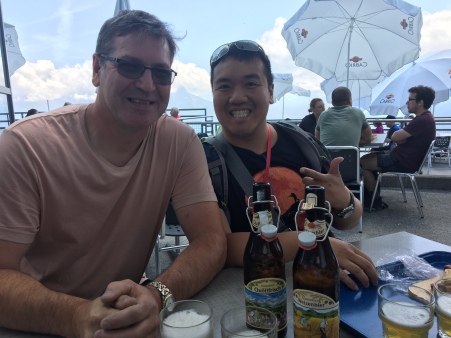 The view down was very pretty since we were facing the lake. As we descended, there were indeed some cows and goats on the hillside, like in Heidi!

Switzerland was a very pleasant surprise for me. It was the perfect mix of adventure and history. I am so glad it was part of our trip or I may have never experienced this beautiful country. With it’s old world architecture, the mountains and lakes, and an abundance of history and folklore, Lucerne was a great place to visit.  It was so much more than just a stop between Italy and France!

One thought on “Lucerne, Switzerland”