On our recent trip to Oahu, my husband and I spent a day touring Pearl Harbor.  I guess because the events of that day happened so long ago, people our age don’t really grasp just how vast and horrific the destruction was or how many people lost their lives.  Our visit changed that for me and gave me a real understanding of the true impact of that attack.

Pearl Harbor is actually ran by the National Parks Service.  The Pearl Harbor Visitor Center is open seven days a week from 7:00 a.m. to 5:00 p.m. with various holiday closings.

Parking and Entrance to the Visitor Center are free.  Admission to the onsite Museums and touring the Arizona Memorial are also free.  There is a cost however, to tour the USS Missouri Battleship, the USS Bowfin Submarine Museum or the Pearl Harbor Aviation Museum.  Prices vary (see Pearl Harbor information Link above) and can be purchased individually or as part of a complete package for $72 pp.

TIP: Plan ahead for your visit or book a guaranteed tour package.  Only 1,300 tickets to the memorial are given away every day, starting when the park opens at 7:00 a.m. Tickets are available on a first-come, first-served basis

I am honored to say,  that during our visit we met one of the last 3 remaining Pearl Harbor survivors, Sterling Cale (soon to be 98 years young).  Since SGM Cale worked as a medic and was a trained diver.  On the day of the attack he dove into the water during the bombings and began rescuing and recovering injured men without any thought for his own safety. He continued to be a leader in the recovery process for weeks after the attack.

SGM Cale had a long military career between both the US Navy and the US Army that included service in both the Korean and Vietnam wars.  If he doesn’t exemplify what a True American Patriot is, I don’t know what does.

The Japanese led a surprise attack on Pearl Harbor, Hawaii, on Dec. 7, 1941.  The U.S. battleships at the base were neatly lined up in rows within the harbor.  They were easy targets for the Japanese who used advanced tactics we were not prepared for like deploying their planes from aircraft carriers and bombs that could be used in the shallow waters of the harbor.  A Japanese armor piercing bomb detonated a powder magazine in the Arizona and the battleship exploded violently and sank, causing a loss of 1,177 officers and crewmen.  It was sobering to watch the movie recounting the events of that day before boarding the tender that took us out to the Arizona Memorial.

Along the way we passed markers representing several other ships that were bombed that day.  The Oklahoma, which fully capsized due to damage from the bombing, trapping hundreds of men inside her as she sank.  The Nevada, which was also badly wounded by several Japanese bombs and then forced to run aground where it eventually sank.

Finally we made our way to the USS Arizona Memorial.  Looking up from inside, a flag flies high as a reminder that we are a free nation and to honor those brave people that gave their lives to protect our country.  I think we often forget the sacrifices that have been made to afford us our freedoms.

As you pass through the Memorial, you can look down into the water and see the wreckage that still remains below.  Etched on a wall inside the final chamber is a list of all the names of the men who were lost on the Arizona that day.  An eternal reminder of their ultimate sacrifice. 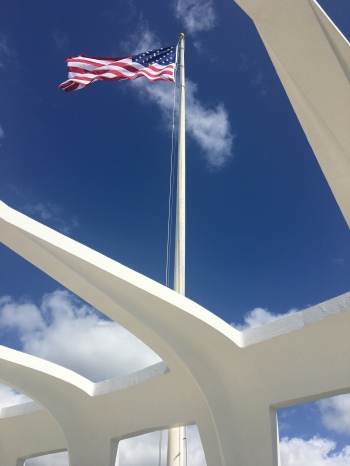 After exiting the boat from the Arizona Memorial, we walked along the waters’ edge reading each one of a series of plaques along the way that explained the logistics and unfolded the events of that day.  The Japanese had done their homework, and done it well.

This monument is an actual anchor from the Arizona.  We went through two other museum exhibits with replicas of the radar and communication equipment used in 1941, diagrams of the strategies used by both sides and the remains of bombs from that fateful day.

The USS Missouri was launched on January 29, 1944.  It was one of several Iowa class battleships that were designed to be fast enough to intercept Japanese ships and strong enough to engage in gun battle. After the Pearl Harbor attack, the ship supported landings at both Iwo Jima and Okinawa.

On September 2, 1945 the Japanese Instrument of Surrender was signed on the deck of the USS Missouri, signifying an end to the war.  Although we inevitably moved primarily from battleships to aircraft carriers and submarines, the ship remained in action until being decommissioned in 1955.  The attack at Pearl Harbor launched us into WWII and the Missouri stands there still representing the end of that war.  A full circle.

“Let us pray that peace be now restored to the world, and that God will preserve it always. These proceeding are closed!”

I am very glad we visited Pearl Harbor during our short but busy Oahu vacation.  In addition to being  historically informative, it provided a more intimate connection for us to what happened on the day of the attack. Unfortunately, we didn’t have time to take the extra tours of the Missouri, the Bowfin or the Aviation Museum.  That just means we will have to go back and visit Pearl Harbor again in order to do so.

I never imagined having the opportunity to meet an actual Pearl Harbor survivor like Mr. Cale.  We are blessed to have had men like him in our Service.  His book provides a very real recounting of what happened that day and the horrific aftermath of the attack.  He didn’t let the events of that day break him, but instead he moved forward with fierce determination as did our Country until we ultimately won the war.