February is Mark’s “Birthday Month” as he likes to refer to it.  So for a little winter fun, we decided to visit the Northern Indiana Beer Trail.  We had never been to any of it’s breweries, so it would be a true BeerVenture.  I booked us a room at the Holiday Inn Fort Wayne/Purdue and sent for a Visitors Guide from the Ft Wayne Tourism Council.  The guide came with a Beer Trail information sheet which listed all the Breweries on one side and a map on the other.  There are 17 breweries listed on the Trail, so we would have to pick a few that sounded interesting and leave the rest for another visit.

The trip from Michigan is a little over 2 hours.  We both worked Friday so when we were starting to get closer to Ft Wayne, the hunger pangs began to set in.  That was when we decided to stop at Mad Anthony’s in Auburn located about 20 miles north of Ft Wayne.  It was a pretty big place that was very busy when we arrived, but we still got a great table.  It had more of a Local Restaurant feel than a Brewery.  There were a lot of interesting appetizers on the menu so we ordered a Beer Cheese and Crawfish Dip to go with our beer.  It was messy but good.  For our main course we shared a Viet Banh Mi sandwich served with scooby snacks (potato wedges seasoned with crab seasoning and served with a creamy dip).

Mark drank a pint of “Snow Plowed” a winter ale and I had their Stout called “Harry Baals”.  Both were good beers.  It was a nice start to our BeerVenture.  We were able to pick up our Brewery Passports there and get our first stamp before completing the journey to Ft. Wayne and our hotel.

Although there are quite a few breweries right in Ft. Wayne, there are also several that are located further out.  On Saturday we got up early and grabbed a hearty breakfast before heading to the most remote breweries on the Northern Indian Beer Trail.  Using the little map in the front of my Brewery Passport as a guide, we chose our path.

I plugged the address into the GPS for Evil Czech Brewing and we made the nearly 90 minute drive from Ft. Wayne.  I knew we had made the right decision when we got there around noon and the joint was packed.  This place was everything I love in a funky Brew Pub.  Lots of fun brewery character and an interesting theme.

We did not do our homework well enough to know that they have a great “Lightning Lunch Buffet” every day until 2.  For $12.95 you can get unlimited small plates (Sunday’s it is $17.95) and they looked amazing.  Sadly we were still stuffed from Breakfast, so we did not opt to partake.  Something to look forward to Next time!  I did enjoy an Oatmeal Breakfast Stout called “7 AM” and Mark had an “Evil Czechmunk” IPA.  I would have been happy hanging out here for a while, but we had places to go and beers to drink!

Fun Fact:  I am a huge fan of tiramisu.  I saw that they had a “Birramisu” listed on their menu that was made from their “Voo Doo” Vanilla Porter.  It sounded interesting so I asked for one to go.  The Waiter explained that they can it, like a beer.  Oh yes, had to try that.  Popped it later that night and it was fantastic!

We wanted to check out Man Cave Brewing, but they didn’t open until later in the day.  Since we didn’t have time to wait around for that, we headed to Goshen Brewing.  This brewery gave me a kind of cold hipster ‘meh’ vibe.

It wasn’t too far to get from Goshen to Leesburg where we found Hop Lore Brewing. I was already excited as we approached the site when I saw that it was an old country Mill.  I love when old buildings get reinvented into cool new things. They did a great job with the building updates.

The young man Bartending seemed to be working all alone and was doing a fine job with a pretty full house.  We sat at the bar where he noticed me scribbling in my beer journal.  He seemed impressed that I make beer tasting notes but laughed that I still write them down on paper. 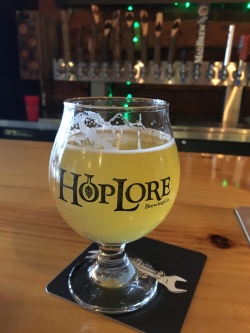 Everyone there was super friendly and we managed to have conversations with several locals as we enjoyed our beer.  I ordered a Saison that I thought was very good and Mark had the “Ever Powerful Casey Jones,” an IPA.  I could see us hanging out here if we were locals as it was a very comfortable feeling place.  While chatting with the Bartender, we got some recommendations for other places to try and ideas for dinner.

One of the places the Bartender at Hop Lore suggested was Two Toms.  We were glad to finally have wound our way back to Fort Wayne.  Two Toms was pretty new. The super friendly Bartender shared that they had indeed only been open 7 months.  He was so friendly and very happy to talk about their beers and give us more suggestions for breweries and dining.   This place was designed for hanging out a while.  There were long tables with enough room for all your friends and shelves with games to play while you share a pint.  It also seemed family friendly with a foosball table and plenty of space for the kiddos. 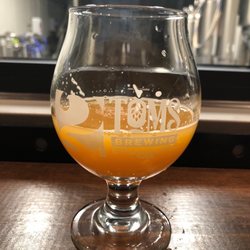 I had a “Mango Milkshake Nitro” just to mix things up a bit.  It was very yummy, creamy but a just a hair too sweet for me.  Still liked it.  Mark went for a  low ABV IPA that he was quite happy with.  Unlike me, he didn’t branch out too far from his comfort zone and he stuck primarily to IPA’s…..boring!  But to each their own.

Based on recommendations from the Bartenders at Hop Lore and Two Toms, we thought we might have dinner at Junk Ditch Brewing Company.  It wasn’t far and when we got there the Hostess and Waiter seemed concerned that we didn’t have reservations.  OK….reservations at a Brewery for dinner at 5pm.  Some folks were just leaving from the bar so we managed to get seated (although it seemed to fluster our hosts).  My red flags were already waiving!

For a brewery, they seemed much more focused on their “foodie menu” than the beer.  I noticed later that they don’t even list their beers on their website, just the food menu and a giant block urging you to make a Reservation.

We ordered arancini for an appetizer to go with our beer.  It was outstanding.  I had a Weiss beer, still opting to mix up my day and Mark had another IPA.   The dinner selections ranged from $18 -$40 per person and didn’t really look like what I was after on a BeerVenture….too foo foo.  So we finished our appetizer and beer and settled up.

Our last stop was the Hoppy Gnome listed as a ‘gastropub’ located in Ft Wayne.  Now we were really ready for some dinner.  When we arrived, there was a pretty good crowd waiting to be seated but the Hostess only indicated a 25 minute wait.  Totally reasonable for a Saturday night.  But less than 5 minutes into our wait, Mark spotted openings at the bar.  We quickly made our way in and got seated.  Win! 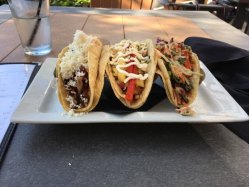 You could order their beer, guest beers, wine or cocktails.  I ordered a beer called “Unilater Ale” which was a super tasty American Ale and Mark had Fall City Beer’s “Hipster Repellant” (you guessed it, an IPA.)  The menu was so much more brew friendly…Hooray!  One item offered was your choice of 3 tacos for $13. Not just any old plain tacos, you could pick any combo of 3 from their 11 unique taco creations.  I knew I wanted the Mahi Mahi and Smoked Brisket Tacos and our Bartender (who I think was one of the owners) helped me choose the Jerk Chicken as my third.  Mark ordered Thai Lamb chops which he raved about.  We ended up really happy with our visit to The Hoppy Gnome.

The Bartenders at Two Toms Brewing and the Hoppy Gnome were the friendliest and most engaged that we met.

Mark and I agree that the best Brewery Vibe was definitely Evil Czech Brewing.  Decor, Beer, Menu and Atmosphere they had the whole package happening.  Not to mention that off the hook Birramisu!

The most welcoming “Stay a While” atmospheres were from Two Toms and Hop Lore.  Both felt like very warm and inviting places.

I had a lot of great beer so it was hard to choose a favorite, but  I think that the Harry Baals at Mad Anthony’s really hit the spot for me.  Mark’s favorite was the Evil Czechmonk at Evil Czech Brewing.

The Best appetizer was the Arancini at Junk Ditch Brewing.

This was really a fun BeerVenture. I would totally recommend exploring some of the breweries on the Northern Indiana Ale Trail if you get the chance.  For our weekend, we only made it to 7 of the 17, so we have plenty left for the next time. 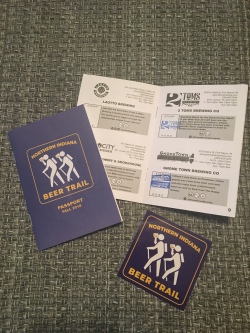 Now knowing the distance between the Fort Wayne breweries and the outliers, I would have stayed the first night closer to where we started on Saturday to cut down some drive time.

When we visit next time, we will definitely plan to be at the Evil Czech for their “Lightning Lunch.”  We also had several suggestions that we should visit Bare Hands Brewery in nearby Granger.

This was a great way to spend an otherwise blah February Weekend.  Cheers!